The last time I drove an Alfa Romeo Stelvio, it was the standard Stelvio Q4 with a 2.0 liter turbocharged four-cylinder engine. I called it the “Leaning Tower of Alfa Romeo”, as it was as beautiful and as flawed as the famous tower in Piza. After driving it, though, I was as enamored with how sharp it handled, how seductive it looked and how exotic it felt, even though it was just a four-cylinder, mid-size SUV. So when a Rosso Red Alfa Romeo Stelvio Quadrifoglio arrived at my front door, you can only imagine my excitement.

While the standard Stelvio is a genuinely pretty SUV, the Quadrifoglio variant drops jaws. The styling differences, when you actually account for them, aren’t that vast between the two cars. Only a new lower front air intake, massive 20-inch wheels and quad exhausts really differentiate the standard Stelvio from the extra spicy version. However, while not vast, they’re incredibly effective. Those few differences in style are as effective as a high leg split on a tight black dress. Minor but will make jaws drop. Say what you will about Alfa’s reputation for poor reliability but one look at a Quadrifoglio and you’ll care about its reliability about as much as you’d care about Gal Gadot hogging the sheets in bed. 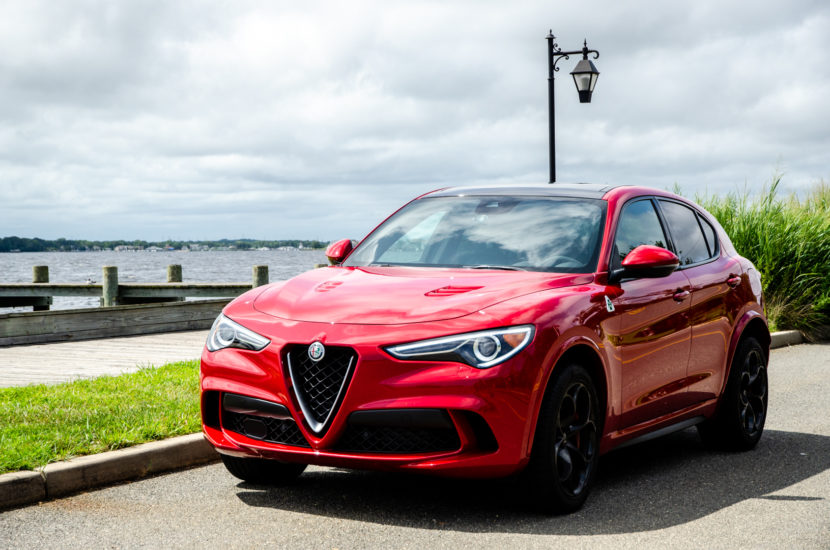 Once inside, though, that feeling starts to fade. While the cabin of the Stelvio is good looking — with a sharp design and one of the top five coolest steering wheels in the business — the materials, fit and finish leave a lot to be desired. I often give Alfas a hard time about their cabins, almost to the point where it feels unfair. Sometimes I wonder if I’m being overly harsh and exaggerative. Then I get inside another Alfa and I remember why I’m so harsh. Our Alfa Romeo Stelvio Quadrifoglio wore an as-tested price of $83,690 yet had the interior quality of a $17,000 Hyundai Elantra. Now, I’m not dogging the Elantra. For the price, it’s a great car. But its interior does not belong in a premium, super SUV with a price tag that’s worryingly close to six figures.

However, I’ve complained about Alfa’s poor interior quality ad nauseam. So I’m not going to do it anymore. The reason for that is, like with the Giulai Quadrifoglio, the moment you thumb the steering wheel-mounted starter button, all of your complaints will disappear. As did mine.

While the Stelvio Quadrifoglio is a truly great looking SUV, sitting in its driver seat is even better, thanks to just how special it feels to drive. From the driver’s seat, you look out over the scuttle at its sculpted hood, with its two fully-functional black vents, you hear that 2.9 liter twin-turbocharged V6 roar to life and you hold a thin, Alcantara and leather-wrapped steering wheel with two simply gigantic aluminum paddles flaking either side. Just sitting in the Stevlio Quadrifoglio while stationary feels special. 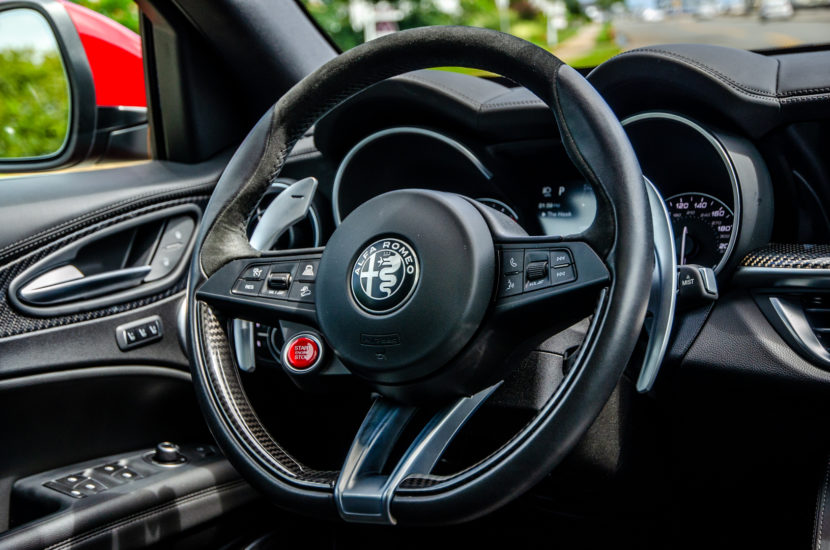 Even more special than that is when you put your foot down. I remember the first time I drove the Alfa Romeo Giulia Quadrifoglio, the Stelvio’s little sedan brother, and was blown away by its perfect blend of delicacy, balance and brutish power. The Stelvio Quadrifoglio doesn’t have that same perfect blend. In fact, it’s far more singular in its focus and that was obvious within five minutes of driving it.

My first drive was a short one, just a few minutes away from my home. When I arrived, though, it was immediately apparent that Alfa has designed the Stelvio Quadrifoglio to be the most savage SUV on the planet, full stop. It accelerates like it’s been fired from a trebuchet; there’s a hint of lag and then instant, rubber band-like forward thrust that’s simply astonishing. Forget how big it is, the Stelvio Quadrifoglio’s performance would be impressive in any car. Afla claims 0-60 mph in 3.6 seconds and that seems conservative. But it does so with such anger. Above 3,000 rpm in anything other than “Race” mode (which keeps the exhaust in full anger all the time), it makes a deliciously devilish noise that’s intoxicating in a naughty sort of way. A few bursts of acceleration in the Stelvio Quadrifoglio had me wanting more but almost feeling guilty about it. 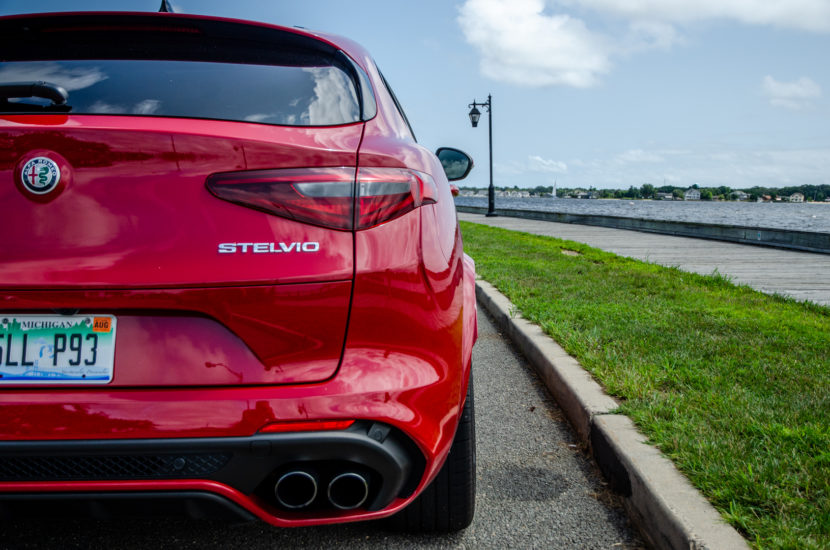 Then there’s the handling. Never in my life have I driven an SUV, regardless of its performance, that steers and grips the road like the Hot Stelvio. That isn’t always a compliment, to be honest, as there are genuine flaws about the way it handles, which we’ll get to in a moment. But there’s literally nothing else like it in its segment. Turn in is immediate. Not fast, not sharp but immediate. Its steering is just as fast as the Giulia Quadrifoglio’s but with its wider front tires if feels even more aggressive. Those massive tires, accompanied with all-wheel drive, also give it tremendous grip, allowing it to take corners at speeds that SUVs simply shouldn’t be able to. It takes your breath away.

Here are those flaws I mentioned, though. Due to the fact that its steering is as fast as the Giulia’s but has larger tires, all-wheel drive and rides significantly higher, the Stevlio Quadrifoglio can feel a bit…sloppy. It’s not that it isn’t incredibly sharp or capable, because it is. But thanks to a tall ride height and a suspension that can’t always fight the physics of its tall-riding body roll, the super-fast steering is actually too fast for it. So it feels as if it can change direction faster than its suspension can keep up sometimes and that feels a bit unnerving. 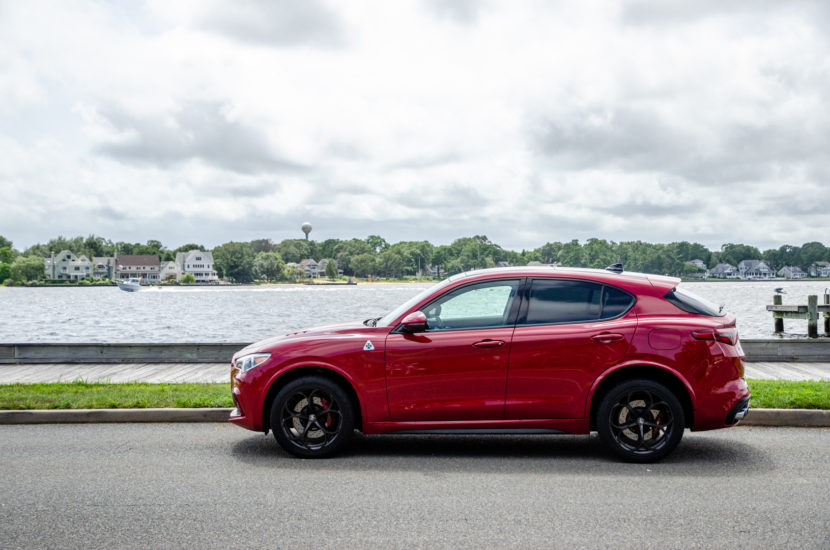 Also, while its suspension allows for too much roll, it isn’t supple in the slightest. In fact, it’s very stiff. The Alfa Romeo Stelvio Quadrifoglio holds the lap record for SUVs around the Nurburgring. To do that, it needs stiff suspension but because it also needs to sit up high, Alfa had to make the ride quality brittle so as to not be bouncy or sloppy. Alfa would have been better off fitting it with more supple suspension, Nurburgring times be damned. The Stelvio is never going to handle as sweet as the Giulia, so it should at least ride well and it doesn’t. If you want a fast, stunning looking Italian, get the Giulia Quadrifoglio and take the money saved and by a minivan for your family needs.

Honestly, though, none of that matters. It’s not often that you come across an SUV that begs you to drive it. The Alfa Romeo Stelvio Quadrifoglio is a flawed SUV that is too expensive and, honestly, doesn’t make much sense. Yet there’s something about it that beckoned me, constantly. Not only is it beautiful but there’s an unnecessary savagery to it that makes it so compelling. Would I buy it? No, the Giulia Quadrifoglio is quite possibly the finest driving car on sale with four doors, so I’d never take the Stelvio over it. But if I had to have an SUV and it had to be fast, there’s no question. I’d have the Alfa Romeo Stelvio Quadrifoglio. There’s nothing like its beautiful savagery.

VIDEO: Check Out Some Maintenance Tips for B8 Audi S4 and S5

Two of the performance Audis currently growing in popularity is the B8 Audi S4 and Audi S5. Both cars are built on the same chassis..
Read More

Having done this job for several years, I’ve tested most of the high-performance sedans on the market. With the exception of the Tesla Model 3..
Read More

As cool as the Audi RS6 Avant is, it also has a lot of great competition. Cars like the BMW 8 Gran Coupe, Porsche Panamera..
Read More