For decades, Germany has been the geographical hub for the best sports sedans in the world. If you wanted a car with four doors, a great engine and handling that’d threaten genuine two-door sports cars, you bought something from Germany; be it a Mercedes-Benz, BMW or Audi. While that hub is still the center of the sports sedan world, it’s being threatened by outside nations, such as Italy, America and, most recently, South Korea. The latter of which produces the all-new Genesis G70.

So What is the Genesis G70? 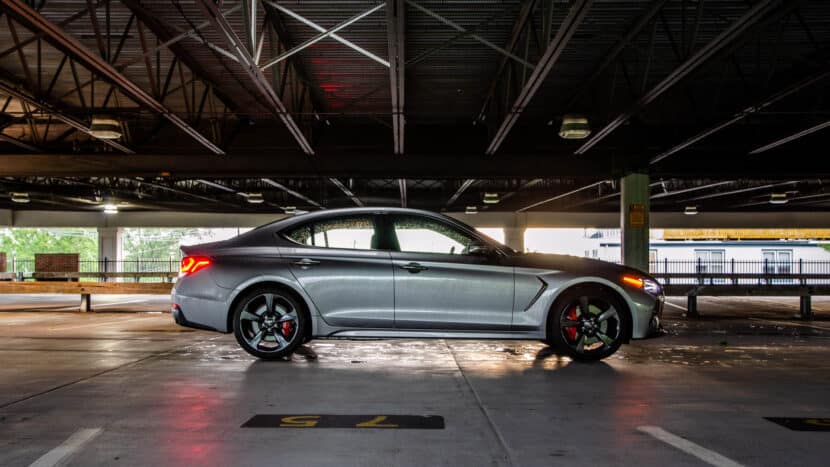 For those of you not in the know, Genesis is the luxury arm of Hyundai, similar to what Lexus is to Toyota. It might sound odd to imagine a Hyundai-backed premium sport sedan taking such legendary cars as the BMW 3 Series, Mercedes-Benz C-Class and Audi A4 but that odd feeling is just the fear of the new. Open your mind a bit to the idea that unexpected automakers can develop proper premium sport sedans and give the Genesis G70 a chance and you’d have to be the world’s biggest curmudgeon to not be at least a little bit impressed.

What Sort of Engine Are We Talkin’?

Let’s start with the specs of my specific test car; it was a 2020 Genesis G70 3.3T AWD Prestige (the South Koreans have adopted the German way of incredibly long alpha-numeric naming). It was painted in Savile Silver with black leather interior and all the bells and whistles. 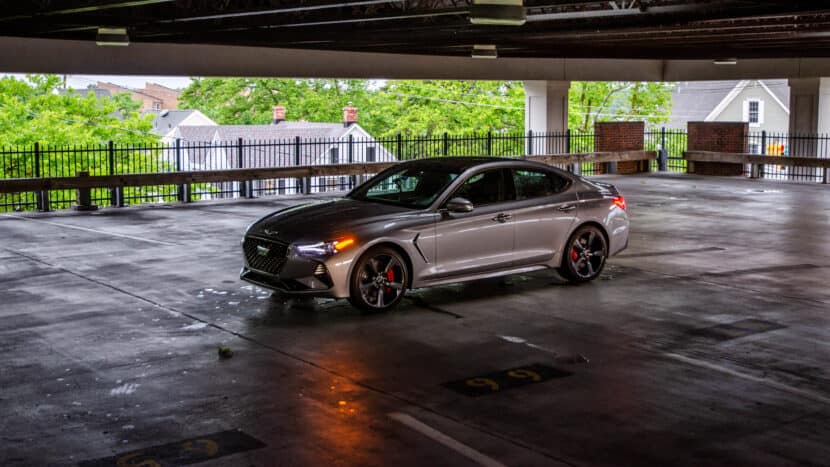 The G70 3.3T competes directly with the Audi S4, so it packs 3.3 liter twin-turbocharged V6 makes 365 horsepower and 376 lb-ft of torque. That’s actually more power than the S4, with 349 horsepower and 369 lb-ft from its single-turbo 3.0 liter V6. Like the S4, that engine is also paired with an eight-speed automatic and, as the name of my tester implies, all-wheel drive. It gets from 0-60 mph in about 4.5 seconds and runs the quarter-mile in around 13 seconds.

So it Must be Fast, Right?

Yup, it’s fast. Though, that’s not hard to imagine given the aforementioned specs. What’s surprising is just how hard it seems to pull, and how similar it feels, to the Audi S4. Considering the fact that the Genesis G70 3.3T directly competes with the Audi S4, the latter was my butt-dyno-benchmark and the G70 pulls just as hard once its on boost. Oddly enough, much like the S4, the Genesis G70 3.3T does have a bit of turbo-lag low down. However, once both cars get on boil, they pull with similar velocity. 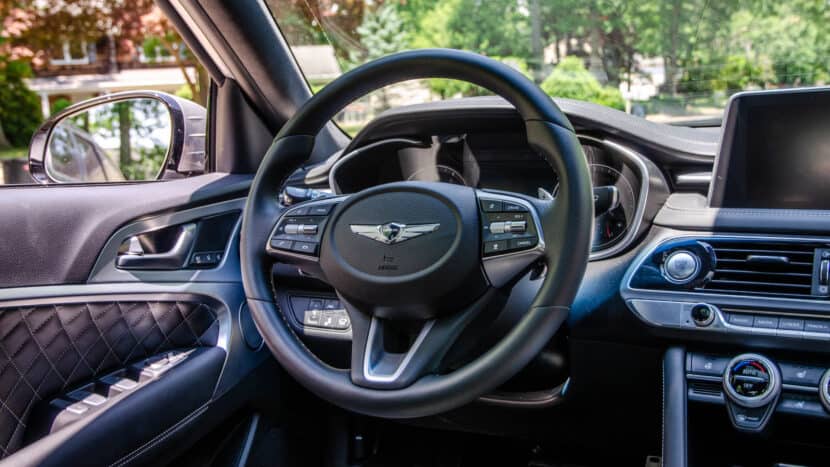 Though, I’ll say that the S4’s entire powertrain is smoother. The Genesis’ engine is solid, it’s not as good as the S4’s engine, nor is it as good as the rest of its segment-competitors engines but it’s a solid engine with solid performance. Where it’s a bit let down is in its gearbox. The eight-speed auto in the Genesis G70 is okay most of the time but does seem to struggle a bit when left to its own devices and it isn’t snappy enough in manual mode.

You Might Also Enjoy:  Sixth Audi City to open in Moscow

When left in automatic, the auto ‘box seems to hunt for gears a bit too long and then can be over-eager to downshift too far down and launch you forward unexpectedly. In most normal driving, it’s fine; with smooth shifts that are fast enough; but it can be caught out in awkward moments, whereas the S4’s eight-speed auto calibration is bordering on perfection. Also, when you decided to take over and shift gears yourself, it’s just not fast enough to make it engaging. In a nutshell, it’s fine but has its issues.

It must be said, though, that Audi sources its eight-speed automatic from ZF, whereas the Genesis makes its eight-speed auto in-house. The ZF-sourced gearbox is used in almost everything right now, so it’s proven to be brilliant. So while it’s commendable that Genesis developed its own gearbox, it’s just not going to be as refined as something that’s so proven and so tried and true.

Is It As Good a Sports Car as the Audi S4?

Yes. The Genesis G70 3.3T’s biggest attribute is the way it moves down a road. The rear-wheel drive chassis that underpins this new Genesis, along with the KIA Stinger, is a sweetheart. It’s balanced and rigid and allows the G70 to be a proper athlete. Chuck it into a corner and it wants to oversteer but it breaks loose progressively and is super-easy to catch and hold right at the limit. Mock the G70 for being a Hyundai/KIA product all you want but the G70 is more playful than the S4 and more engaging to drive. 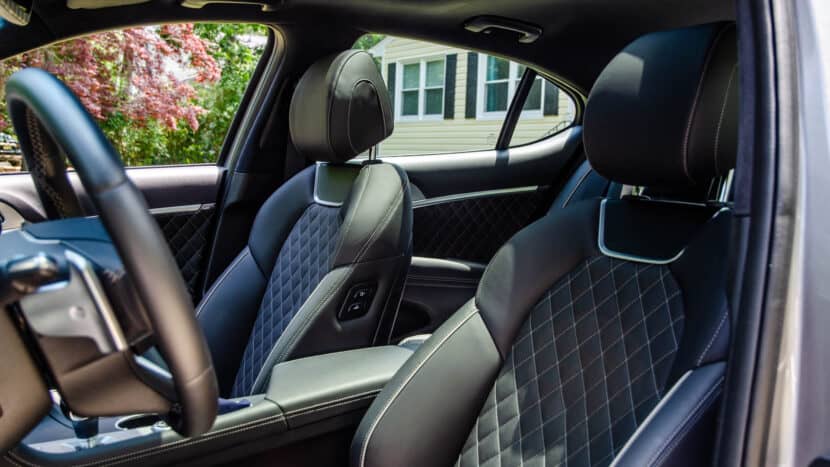 The G70’s steering is also lovely It’s lighter than you’ll find in the S4 but its ratio feels a bit faster and actually provides better feedback through the wheel. It’s a bit short of the segment benchmark — the Alfa Romeo Giulia — but I’d argue it’s the next-best steering in the segment. I also really like the feel of the steering wheel, which has a thin rim and is easy to wield. Though, the center airbag cover feels a bit cheap and plasticky, which is far less premium than in the S4.

You Might Also Enjoy:  VIDEO: CarGurus Checks Out the Audi A3 Sportback

Even though my test car was all-wheel drive, it often sent more than enough power to the rear wheels to get the back end out. With traction control on, it will allow for a bit of fun before the electronic nannies come in and sort things out. However, traction control can be disabled with just the push of a button and then it will really let the car slide around. And it’s more than willing to slide around as often as possible. It’s a very playful little car.

Far more so than the Audi S4. While Audi’s Quattro all-wheel drive is likely superior in bad weather, as it’s typically superior to every other competitor’s system, the Genesis’ is far more engaging, thanks to its rear-bias. All-wheel drive cars typically don’t slide as eagerly as the Genesis but we’re glad that it does. 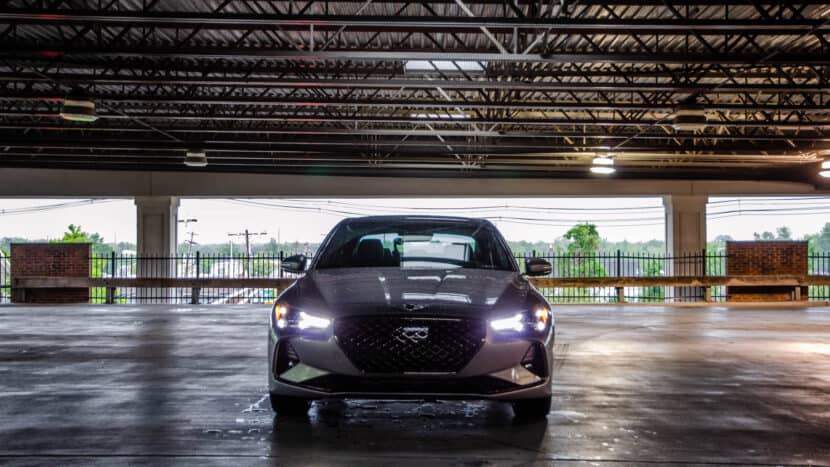 I don’t love the suspension calibration, though. With the adaptive dampers, I doesn’t seem to have a sweet spot. Comfort is too floppy; allowing too much roll but also crashing too much over bumps and not having enough damping; while Sport is overly stiff without any real handling benefit. It’s okay but the suspension in any of its competitors is better.

How Are We On Tech?

Being a Hyundai/KIA product, you’d expect the Genesis G70 3.3T, its top-of-the-line G70 model variant, to be packed full of goodies. And it is. It gets a touchscreen infotainment system, a snazzy Lexicon surround sound system, Apple CarPlay, wireless charging and advanced semi-autonomous driver aids.

Among its many tech features, there’s some good and some bad. The touchscreen infotainment system is unfortunately in the latter group. Not only is the screen too small and too far away for easy reach but it’s also not as responsive as it should be and the icons and fonts are too small to read quickly while driving. The map also isn’t great and it has too many confusing submenus. The surround-view camera works really well but that’s about the best part of the infotainment screen. 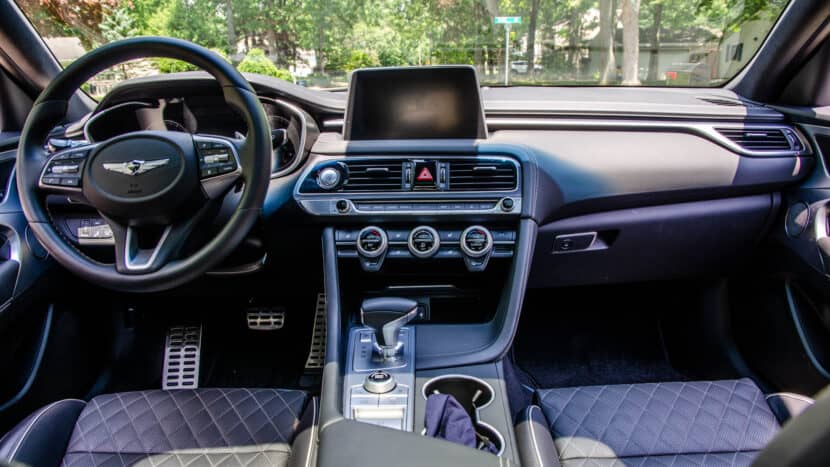 However, the advanced driver aids really impressed me. Use the steering wheel mounted buttons to engage the system and it will lock onto lane markers, as well as the car ahead, while on the highway. While that’s not new or unique in this segment, I actually think it’s among the best of them.

Okay, It’s Good but What About the Quality?

If you’re getting into a Genesis G70 3.3T and expecting any sort of Audi quality, you’re going to be disappointed. While it’s not bad by any means, and actually has a nice design and layout, it’s just not up to par with its German rivals. Take your pick; the BMW M340i, Audi S4 or Mercedes-AMG C43; and the quality will be markedly better than in the Genesis.

There are some redeeming qualities, though. The seats are great, with thick side bolsters and a ton of support while also still being comfortable, the quilted leather on the door panels looks and feels high quality and there’s a surprising amount of real aluminum trim. But there are more cheap plastics than there should be, such as the center console tunnel and the lower interior door panels. Still, it’s a nice place to spend time, even if it isn’t quite as good as Zee Germans on the inside. 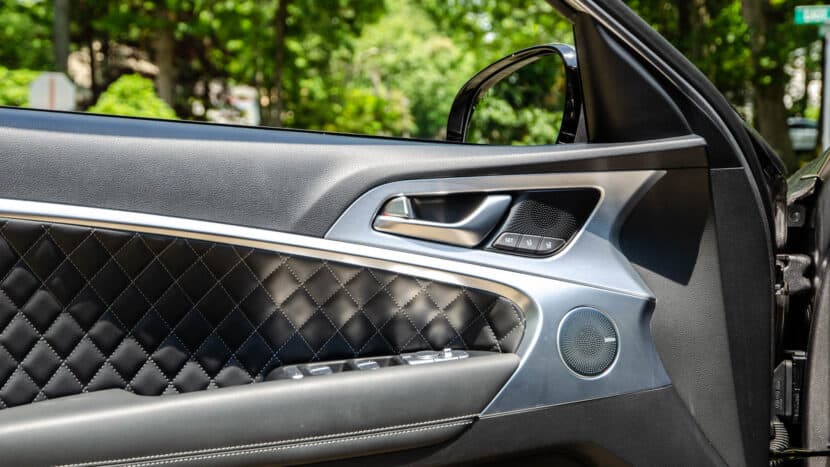 I also think it’s a good looking car. Not every angle works perfectly but it’s an interesting new design that really stands out among the crowd of the same German metal we see on a daily basis. Savile Silver isn’t even a good color for it and it still looks good. I’ve seen it in Adriatic Blue in person and it looks fantastic.

Should I Buy One?

That’s a tough question, actually. There’s a lot to like about the Genesis G70 3.3T. It’s a cool looking car, handles than the S4, has sweeter steering and is more playful on the road. It’s also $5,000 less than the S4 to start. Should you save the five-grand and buy the Genesis G70 3.3T over the Audi S4? That’s a tough question, actually. The G70 is the better driver’s car but the S4 is a better jack-of-all-trades and is more premium.

Personally, I don’t think I would ditch the Audi S4 for the Genesis G70… yet. The G70 is a great car and one that grew on me the more I drove it. However, I think it has some small refinement issues that keep it from dethroning some of its German rivals right now. Having said that, I also think that a decent facelift could elevate the G70 past said Germans. Some better transmission calibration, an update to its touchscreen infotainment and maybe the odd interior quality upgrade here or there would probably push the G70 past the S4. 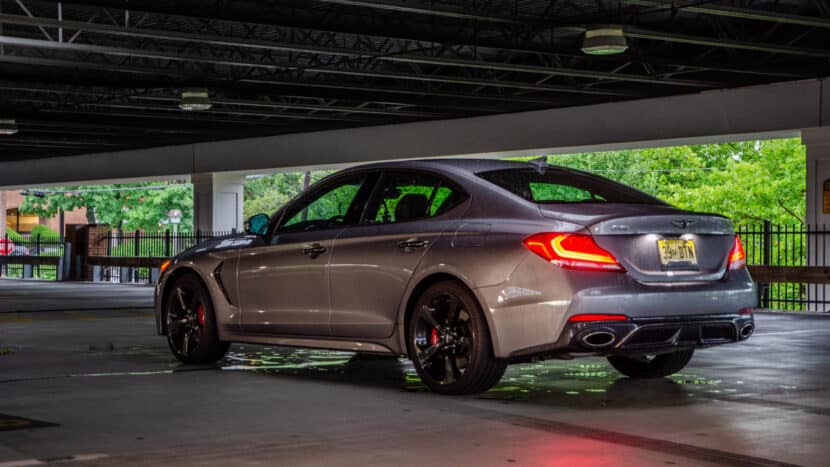 As it stands now, though, I think I’d still buy the Audi. But I applaud anyone that does buy the Genesis G70 and takes the risk on a lesser known car. Customers that do buy it will be getting a good looking, great driving and very reliable sports sedan that they’ll love for years to come.